March of the Penguins

Yes, they're done, the penguins I mean. These 15mm scale penguins (about 8mm tall) from Khurasan Miniatures. I chose to paint them up as Adelie penguins as the fit the sculpts, are easy to do and Wikipedia notes "They are also very aggressive to other penguins that steal stones from their nest". After reading that I had to make their nests the stronghold! From arrival to completion in less than two weeks is probably a record for me.
Posted by Maccwar at 23:38 2 comments:

March of the Elves 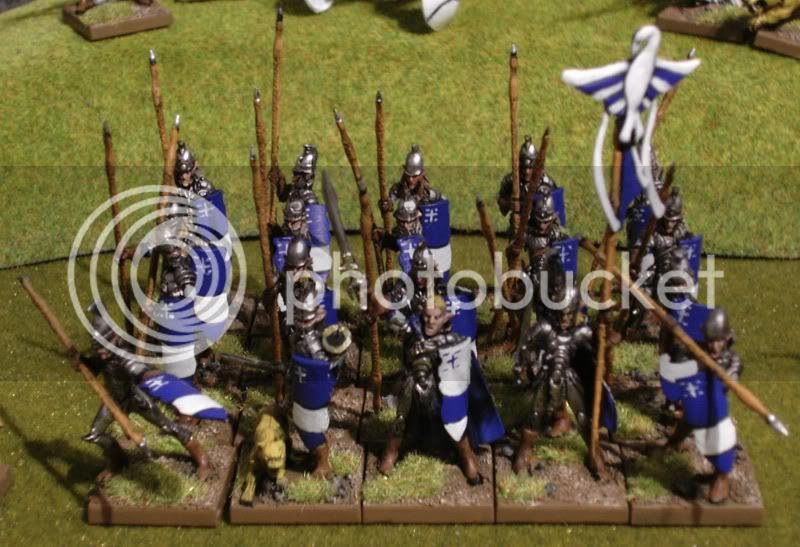 And I've already made a start on the Penguins, but I'll save that for another post.
Posted by Maccwar at 07:47 3 comments:

Here's the first shot of my newly based Mantic High Elves. I need to take some more shots but right now I'm too tired to sort them out. All things considered I think they've turned out well.

Yes, I am now officially sick of painting elves.

The good news is actually finished every last one of them so that's a score on the projects complete chart right off.

The bad news is that I've also bought two new 15mm armies. If you were paying attention you will have spotted the inclusion of a 15mm penguin and a 15mm dark elf army in the post below.

So on figures painted I'm at 18 painted vs 0 bought (in 28mm) but on projects is 1 completed vs 2 new. Mixed results but I'm happy right now.

I'll get some pictures of the elves up after I finish basing them.
Posted by Maccwar at 23:17 3 comments:

Carrying on the tradition I thought start the year with a look at what still remains in the lead pile.

Orcs and Goblins
System: Warhammer
Status: 300 or so figures painted, 50 more or so in the lead pile
Comments: Over 3000 points + options available for use. No progress during 2009.

High Elves
System: Warhammer
Status: 50% unpainted
Comments: New project added during 2009. Current army clocks in at around 1000 points. I would like to expand the army to around 2000+ points before the summer if possible.

Wood Elves
System: Song of Blades and Heroes
Status: Completed (and started in 2009)
Comments: My only finished project for the year.

Blood Angels
System: Warhammer 40K
Status: Still about 1/4 of the army unfinished.
Comments: Over 1500 points + options available for use. Bikes, a land raider and some veterans added during 2009.

Space Hulk
System: Space Hulk
Status: About 2/3 finished. All of the Genestealers are completed, just the marines to go.
Comments: New project started in 2009.

SWAT teams and Criminals
System: Officer Down, about 40 models in total.
Status: 80% painted
Comments: The problem with this project is that it needs more scenery. No progress in 2009.

Aliens and Marines
System: Xenomorph
Status: In the post
Comment: A late 2007 purchase. About 40-60 models in total. No progress in 2009.

Summary - As with last year there's plenty in the lead pile to be getting on with.