The best laid plans of mice and men

I thought I had this year's hobby projects figured out but everything went completely out of the window when my personal life hit the skids at the end of January. Since then I have had much more important things to deal with than painting miniatures. Life will continue to be difficult here for the foreseeable future but I am finally feeling like doing some hobby stuff to escape from it a bit.

I've not felt like picking up a paint brush for ages but I did have a quick blast in early February. Having committed to running the demo of Carnage City Chronicles at ROBIN I decided to paint up a few extra bits to take with me.

Firstly some extra fire power for the CCPD in the shape of officers with assault rifles.

These are from Crooked Dice and they fir in pretty well with my existing CCPD force which is mainly West Wind with a couple of Hasslefree thrown in. If I was starting from scratch I would probably go for the Crooked Dice cops for the bulk of my force as they are really nice miniatures.

I also painted up some subway entrances for my Carnage City boards. These acted as exit points for the scenario I was running. 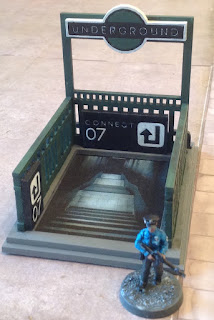 These first two are from Slow Death Games and in the spirit of full disclosure I have to point out that they were sent to me free by the chap who runs SDG who is a top bloke. This is a nice simple kit and goes together rally quickly and easily.

The next two are from TTCombat - I placed the order for them before hearing from SDG so I ended up with four subway entrances for my board. 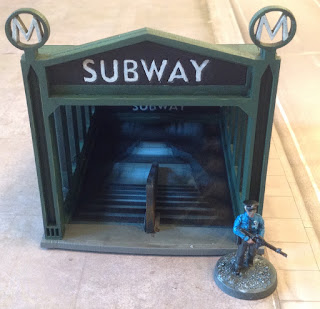 This is a more fancy kit and provides a bit more cover on the table top but fulfils the same purpose on the board. There is a more gothic feel to the TTC ones whilst the SDG kit looks more modern.

The image I used for the stairs is one I found on the internet and edited a bit. It can be downloaded from here if you want to use it yourself.