Now that was quick

Well actually its more of a nooooooooooooo. Yesterday I cracked and ordered a big box of those mantic elves so I have another 52 miniatures and a bolt thrower on the way. Looks like I'm going to have to get really busy with my paintbrush in the next three months if I'm to keep the pledge for this year.
Posted by Maccwar at 21:41 2 comments:

I've finally got round to getting decent pictures of this year's output. Here we go:- 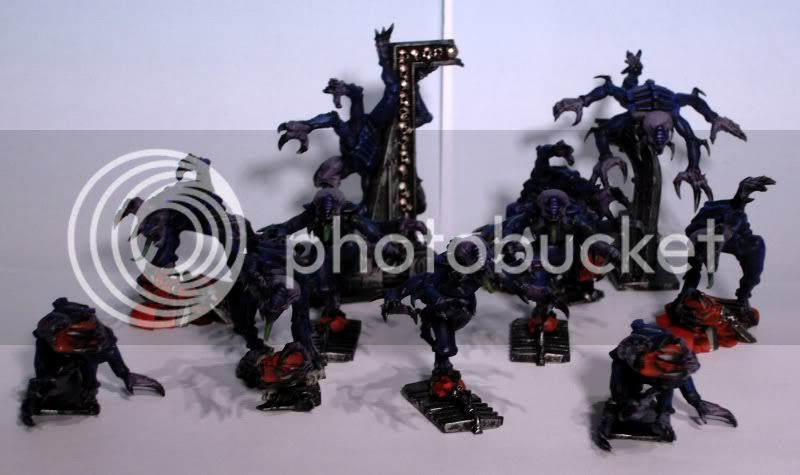 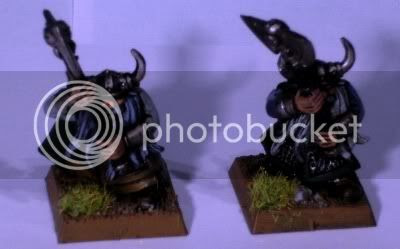 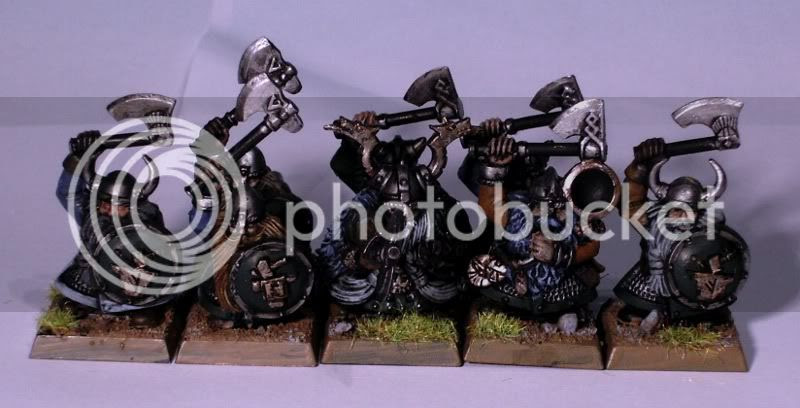 Life in the slow lane.

This week hadn't been very productive. I'd had PNKD every night which has stopped me from painting. Yesterday I had yet another attack and was contemplating another evening of shooting cowboys on Smokin' Guns but instead I decided to at least try to do some painting.

The attack was reasonably mild and confined mostly to my right side and I didn't have any spontaneous movements either which made painting a possibility. I decided to try somethign easy - basecoating the remaining 'stealers and in the end it turned out rather well. I positioned the model with my left hand and did a basic brush stroke action with my right, bracing both hands in close to my body. It may to have been the neatest or the quickest painting I've ever done but I managed to get through all the remaining 'stealers and put a black wash on the carapice too.

This morning (with all limbs functioning correctly) I washed the purple areas (the heads and the hands) of the stealers so that they're all ready for highlights when I get a chance to paint. I even black washed a couple more 'stealers which had been on the shelf and I'd forgotten to do last night. My unconcious mind had helpfully woken me up in the night to inform me that I'd missed them ... gee, thanks.
Posted by Maccwar at 09:30 No comments:

Things are going pretty well with the Space Hulk miniatures. The 'stealers are surprisingly easy to paint up which means that I now have the base colours on most of them. The terminators are also coming along.

I think I forgot to mention that I got sent a couple of free samples of the Mantic Games high elves. Free miniatures are always nice but in this case they're damaging to my pledge totals! I've made a start at painting them and I think they'll turn out nicely. If I didn't already have so many projects on the go I would be very tempted to buy some as they really are very cheap indeed.
Posted by Maccwar at 17:23 No comments:

Things were going so well with the pledge, too well, and then Games Workshop released Space Hulk. Darn. Unable to resist the lure of the shiny new edition shelled out for my very own copy of Space Hulk. Only afterwards did it dawn on me that the game contained miniatures and this was going to throw a major spanner into the pledge.

When my box arrived and I prised it open I was really impressed at the quality of the contents the sculpts are probably the best plastics GW have ever produced.

Yesterday I took advantage of the lovely sunny weather to get everything glued and primed and today I made a start on the painting. So far things are going well. The Genestealers are pretty easy to paint if you stick to the colour scheme the studio used in the artwork. As for the Marines, I'm pretty used to painting Blood Angels by now. I already have the armour done right up to the highlights on about 8 of the terminators, what's likely to slow me down is the huge amount of decoration they seem to be carrying. I'm still pretty positive that I'll be able to turn this major dent in the pledge into a pile of painted miniatures. Here's hoping.

I've made some progress on my 40k army too. I've turned a load of half painted Veterans into a load of fully painted veterans. Not sure what to do on the scoring front for these.
Posted by Maccwar at 18:00 2 comments: