And with another tournament coming up (Alitibash IV tomorrow!) I have been spurred into painting something. This time round it is an Avatars of War vampire that I got as part of the job lot of undead in January. The paint job looks better in person as the highlights on the purple look rubbish in the photo. 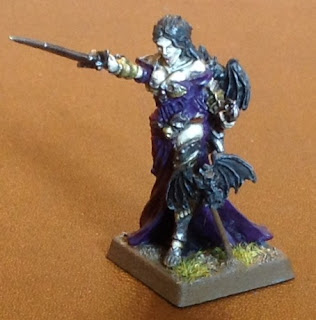 I've also started work on a colour scheme tester for the skeletons I got as the same batch. So far it is looking good so I might well try and paint up a load of skeletons next.
Posted by Maccwar at 11:58 No comments:

I've been slowly chipping away at things and I have now completed one of the two dragons I have been working on for my undead army. I bought this dragon new back in the 1980s from my local model shop. It was originally sold as a Grenadier Chaos Dragon when it was released in 1985. I remember it coming with AD&D stats in the box which would have made it a truly lethal opponent. You can see some photos over on Miniatures Workshop of the original packaging and so on.

I did try and paint it when I first bought it (and one or two times since) but never managed to finish the job. I recall that teenage me could never get the dragon's wings to stay attached but all I had back then was the really slow acting araldite. In the 1990s I tried pinning the wings and attaching them with super glue with a bit more success but the wire I had back then was way to thin. Recently I stripped the dragon and re-attached the wings with some decent wire and got it ready for another attempt at painting.

Using the techniques I have been using on the mantic zombies I have finally managed to finish the job - it only took me about 30 years! Hear that lead pile? There's hope for you guys yet! 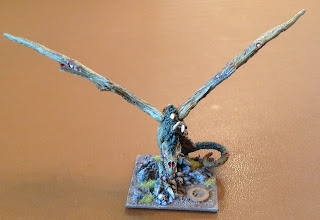 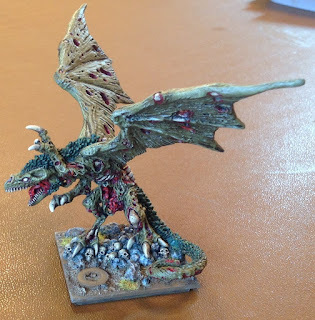 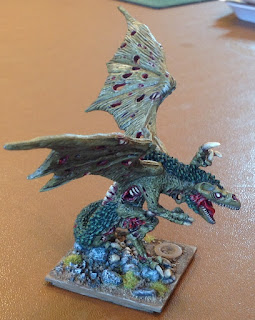 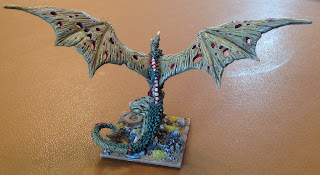 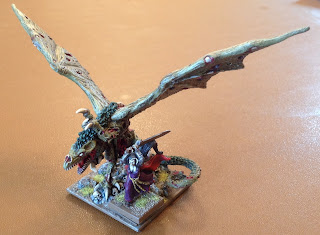 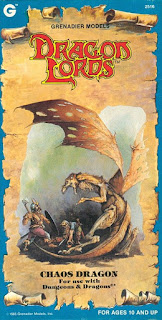 The washer on the base allows a "rider" to be added as shown on one of the photos. The base of the Mantic vampire is magnetised so she can be easily attached to or removed from the base as required.

I'm still working on the LOTR Nazgul on winged beast - that one seems to be taking a little longer to finish.

I think I might finally be back in the swing of things or getting there at least. After much prodding by Dan I signed up for a Kings of War Tournament in Leigh, Lancashire. At the moment I only have my elves and my undead armies out of storage and decided to go with the undead for the event.

My KoW undead were bought and planned under first edition KoW and weren't really optimal for the current meta. I had already purchased some additions to the list to try and make them more competitive. The zombie legion is the first of them that I have completed. It is a massive tar pit and should hold parts of the enemy army up long enough for me to line up some decent charges with my hammer units. 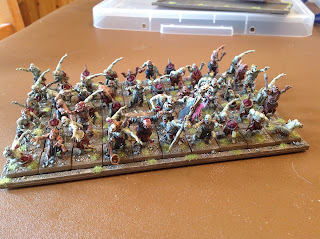 I think it has turned out pretty well and it matches the older zombie units that I did a while back.

I have two dragons for the undead army in progress - they were meant to be finished for the event yesterday but the zombies took longer to complete than I had expected. I got them presentable enough for the event but they still need some more work before I will declare them finished.

The event itself was great fun and I ended up placing 4th with my only defeat being to Tom who went on to win the event.
Posted by Maccwar at 15:48 No comments: