And those Mantic Elf Scouts (Kindred Gladestalkers) are now complete which leaves my workbench more or less clear to crack on with those goblins and trolls. 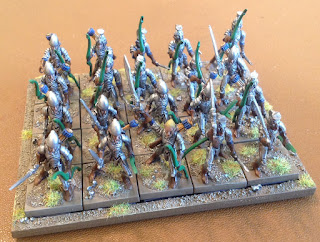 I've got speed painting Mantic elves pretty much sorted so I am hopeful that I can come back to the tray of unpainted elves and work though them before the end of the year. For now I am on to more pressing matters which will involve a lot of green paint.

And now for part 2

Returning from my summer holidays it looks like I'm going to have to get cracking. So far my "year of completing projects" hasn't exactly been going to plan with a grand total of er.. zero projects finished. Secondly this is about the time of year I begin to focus on my Clash of Kings army for October. After taking Elves to the last three events with mixed results I decided it was time to take something else instead. With the current meta being what it is I have opted for goblins with a few upgrades and upgrades has meant purchases.

I did manage to go 8 months without buying miniatures which is probably the longest purchasing embargo I've had in years but the prospect of some discounted trolls proved too much temptation for me to pass up. I have bought 6 more trolls, a troll bruiser and a goblin war trombone - all Mantic. Together with some items from the lead pile these will allow me to field a goblin army at the Clash of Kings that stands a reasonable change of doing well (I hope).

Before getting cracking on with those I decided to try and clear some elves I had already started off my workbench. This small chap has been a work in progress for a while and it really is about time he was completed. The new Mantic elf dragon is made from board game plastic and is an adaptation of the model they produced for Dungeon Saga. The material holds a reasonable amount of detail but I ended up painting the body scales individually as they weren't quite distinct enough to dry-brush as I would usually do. The rider is metal and is nice and crisp. 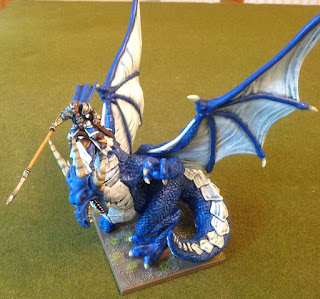 The model is much larger than the original Mantic elf dragon I painted recently, here they are together with my GW elf dragon for comparison.

I'm looking forward to a game where I can actually field all three at the same time.

With the dragon done I'm not putting the finishing touches to some elf scouts which are nearly complete and once those are out of the way then it will be time to get on with those trolls!
Posted by Maccwar at 10:36 No comments: