A shift in my priorities

I had been planning to be deep into painting the elf cavalry at this point but I've switched to painting stuff for Carnage City Chronicles instead as Dan and I are due to run a CCC participation game at ROBIN in Nottingham next month. ROBIN is a new war games show and details can be found here:- http://www.wargamesevents.co.uk/

First on the workbench is the Harmonic Theatre kit from Knights of Dice that I bought back in 2015. It has been sitting around unfinished for ages as I ran out of steam/inspiration part way through the base coating stage. I have now completed the base coat and I have started applying washes. This is still a WIP and is far from finished. 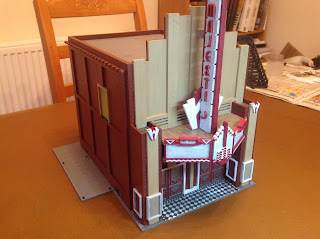 Once that is out of the way I have a few more miniatures to complete and that will be all I need for ROBIN. Or will it ... I placed an order with TTCombat for a few more items yesterday and they would be good to take with me as well (they should be pretty quick to paint up too.

In other news I took my goblins to Altibash 3 on Saturday. Alitibash is a Kings of War tournament run by the nice chaps over at Altrincham Games Club. I wasn't sure if I would be able to make it so my preparations for the event were quite limited. I took the same army as I used at the tournament in Stockport back in September. 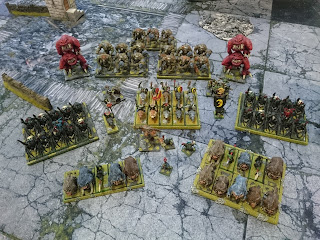 Game 1: Michael Roberts (Kingdoms of Men with Varangur allies) - Invade
Michael had a very nice Kingdoms of Men army and added in a couple of units from his Varangur army to round things out. The army was largely based around hordes and was mostly infantry. I think this may have been a bit of a bad match up for him as my troll hordes made a bit of a mess of some of his units. I also had some lucky rolls and ended up killing everything apart from one wizard (who refused to run away).

Game 2: Andy Ransome (Goblins) - Loot
Andy's orange goblins are probably familiar to many people of the KoW tournament scene but this was the first time we had actually played each other IIRC. At this point in the event goblins were placed 2nd, 3rd and 4th! I made some silly mistakes during this game which I can probably put down to being out of practice and this together with some disappointing dice rolls gave Andy the upper hand. At the end of the game I thought I had lost but it turned out I had misunderstood the scenario rules and a last gasp overrun from my trolls had captured a vital loot token giving me a lucky draw. If memory serves Andy was ahead on attrition by some margin so I was pleased to come away with a draw after a very hard fought game.

Game 3: Sam Barker (Orcs) - Control
Sam set up an intimidating wall of orcs in one corner of the table. Luckily I guessed his deployment plan and set up accordingly. Unfortunately being a little out of practice I still ended up with my trolls slogging across the table and attacking in an uncoordinated fashion. Elsewhere I had some early game luck with wavering some of Sam's units slowing his advance a little and giving myself a tactical advantage with my choice of charge moves. Sam's Krudger on slasher could have been very nasty indeed but ended up only routing a sacrificial mawbeast troop before being war tromboned and lightning bolted to death over the course of the next few turns. As the game drew to a close my dice started to play up and I found I could only manage to waver his units rather than routing them which was frustrating. The final result was a draw but had been so close to being a win. In retrospect I should have shot up his war drum when I had the chance as this would have made a difference to those key rout rolls.

Game 4: Andrew Sharp (Goblins) - Dominate
Goblins for the second time in the event fielded by another Andrew! By this time I was seriously flagging and needed a coffee to revive myself - it was been ages since I have played so many games in one day. This was to be a game dominated by errors. First to blunder was Andrew who overreacted to my troll regiment gambit (which hadn't worked in the game against Andy R) and advanced his troll hordes into my charge range. I dully pounced and the game became dominated by a big scrum in the centre. This didn't seem to bother Andrew too much as his war trombones and wizzes were positioned to provide support and poured wounds on to my trolls and giants. Elsewhere it was my turn to blunder and I made some very dubious decisions meaning I stalled my own advance trying for turn after turn to rout a pesky mincer which was blocking my path. With some slightly less stupid play I would have had a good chance to roll up that entire flank. When the game ended on turn 6 I was surprised to find that I had one. My army had been pulverised but the legacy of the initial scrum in the centre was that I still had enough points remaining there to win the scenario whilst Andrew's surviving units were more to the flanks.

When the final standings were announced I was pleased to find that I had ended up in 3rd place overall (tied for tournament points with the chap who came 2nd). It was a fantastically well run event and I had 4 fun and challenging games. Well done to Altrincham Games Club. 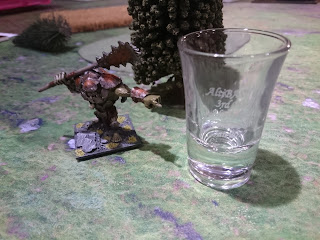 There are more photos from the event here:-
http://imgur.com/a/49Rl6

Lets get this party started

I am pleased to present my first painted models of 2017. Some of these were started back in November but my enforced painting hiatus prevented me from finishing them. Over the last few days I have been doing the last few steps to finish them all off, final highlights, painting the bases, adding the decals and painting the movement trays. For some reason I thought those would be relatively quick tasks but for one reason or another they really seemed to drag this time and it took way longer than anticipated. But that doesn't matter now - they're done, and what's more those are the very last of the elf infantry for my elf army. Just the cavalry to go and the army will be 100%  complete. 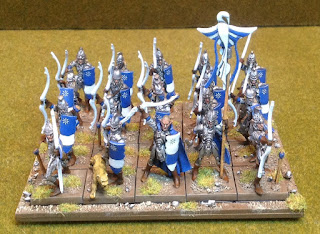 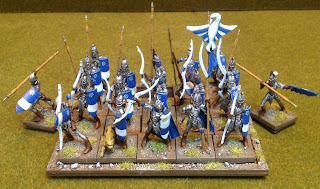 So starting off the year with a big fat 40 in the painted column would be a great start for the pledge if I hadn't already fallen off the wagon and made some purchases. I skilfully avoided buying anything in the January sales but met my match at Warboot (a war games bring and buy sale) at the Northwest Gaming Centre on Sunday. In my own defence I got a serious bargain. 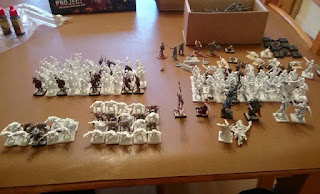 That's 120 or so Mantic undead (with some GW and Avatars of War characters) which I got for the grand total of £15! There were even some random Vikings loitering in the box too. I also picked up a copy of Project Z for £15 (another 41 miniatures) and 4 Bretonnian knights for the Brotherhood project for a mere £5. All of which means I am already about 119 miniatures behind on the pledge, oops. I might sell on some of the bits I don't need from my Warboot haul which will straighten things out a little but I think I need to do a whole lot of painting to catch up.
Posted by Maccwar at 09:29 No comments:

As is tradition, here is a glimpse of what still remains in the lead pile

Orcs
System: KoW
Status: Lots of figures painted, many more in the lead pile
Comments: One small unit painted during 2016, no purchases.

Kingdoms of Men/Basileans
System: KoW
Status: 18 knights started, about 100+ more models unpainted.
Comments: Minor additions made to the army late 2016 ready to make a big push on this project for 2017.

DreadBall Teams
System: DreadBall
Status: 8 teams painted out of 12
Comments: No progress during 2016.

RPG miniatures
System: D&D etc
Status: Lots painted - lots still to do.
Comments: I've been chipping away at these over the course of 2016 - and adding a few unpainted ones as well.

Unfortunately my planned push to complete the elves before the end of 2016 didn't happen. I had been painting away merrily and looking like I would meet the target but I hadn't bargained on being the victim of an assault in early December (it certainly wasn't on my to do list). Fortunately I escaped with mostly cuts and bruises but it put paid to any more painting for a few weeks. I managed to pick up my paint brushes yesterday for the first time since the incident and I will have to keep my painting sessions brief until I am fully recovered from my injuries. At least I have a load of painted and part painted elves from November and early December which I will now be completing in 2017 to give myself a bit of a head start.

Meaning that 2016 was a WIN for the wargamers pledge for the third year in a row.

What about my other hobby objectives for the year?
On the bright side my movement disorder seems to be behaving itself at the moment so if things continue 2017 might be a bumper year for painting. I can at least hope that it will be anyway.
Posted by Maccwar at 18:32 No comments: