So I am plugging away at those elves, honest. I only have 10 more to go and all the infantry will be done just leaving 20 cavalry still to be painted. I am now reasonably hopeful that I will have the elf army finished before the end of the year.

This has got me thinking about what to do next year once the elves are out of the way. I think focussing primarily on one army seems to have worked reasonably well so I thought I might try and repeat the approach on a different project next year and see if I can complete that as well. The candidate projects are my human knights (Bretonnians/The Brotherhood/Kingdoms of Men/Basileans), my dwarves and my ogres. I'm not sure which one to go for so I have opened a poll over on the Mantic forum along with lots of photos of unpainted miniatures.

Talking of unpainted miniatures I have cracked and made some more purchases. I bought another 6 Hasslefree miniatures in their sale (2 modern and 4 fantasy) as well as 10 zombie survivors and Vercingetorix from Warlord games (they sent me a £10 voucher to spend). Even with these new additions to the unpainted pile I am still doing well on the pledge this year.
Posted by Maccwar at 09:43 No comments:

Funny looking elves if you ask me

Okay so maybe I won't paint up the rest of the elves just yet. I had fully intended to but instead the I detoured and painted something else instead.

This week I have been PNKD free for the first time in ages which has been brilliant. The only down side is that I no longer seem to be used to setting hunched over at the table painting for hour after hour like I used to and I now have a sore back. I will have to limit the length of my painting sessions until I recover.

The extra time to paint has borne fruit as you can see below. It also gave me the chance to put a little more effort into my painting instead of painting things in a tearing hurry, as a result I am quite proud of the results.

These two giants are from the Reaper Bones range and will join my KoW Ogre army. 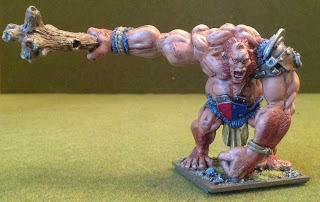 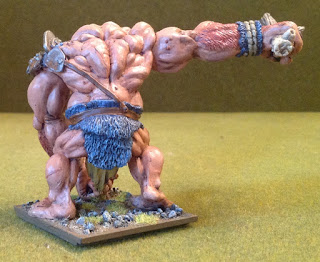 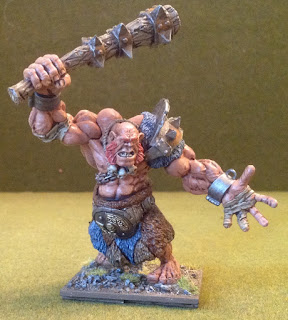 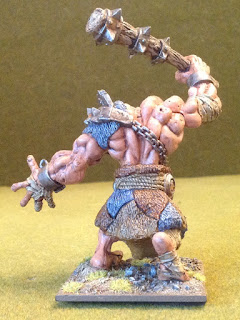 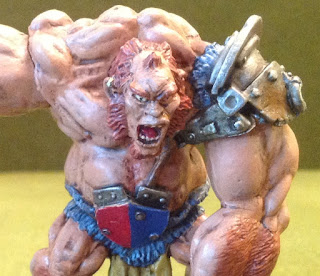 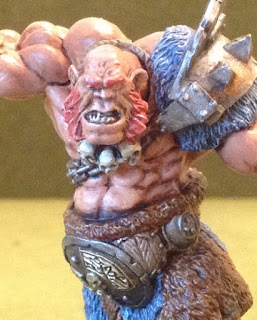 Here is one of the new giants (left) alongside an identical mini I painted up for my D&D campaign last year (right). I'm not sure that the photo shows it but the highlights are much more subtle and realistic on the newer one. 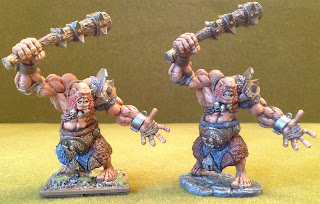 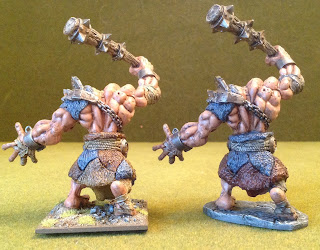 Also joining the painted pile are the two Mantic Lykanis miniatures I bought recently which will be leading the werewolf contingent in my KoW undead army. 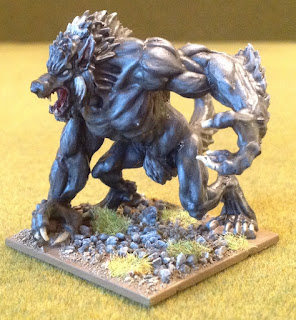 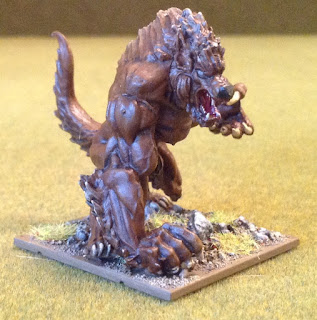 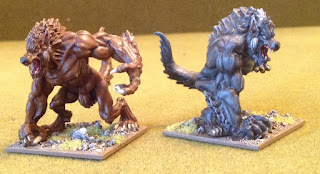 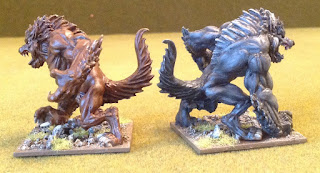 These were fun to paint up and quick too.

Maybe now I should be getting on with those elves after all.
Posted by Maccwar at 16:56 No comments:

The season of mists and mellow fruitfulness

The end of the year is approaching fast, way too fast it would seem for me to meet my target of 300 painted miniatures this year.

I'm still working though the pile of Mantic elves and I have 20 of them almost done - they just need their bases finished and the shield decals applied for them to be finished. I'm holding off on doing those for the moment until I have the next batch of 20 in a similar state as it will be easier to do them all in one go.

Without these I still have painted 160 28mmeq so far so I should easily beat the 200 barrier even if 300 is looking out of reach.

Purchases
After such a good run of not buying things in the first part of the year I seem to have slipped back on some bad habits.
Despite this I'm still 115 miniatures in the good as far as the pledge goes and there is a chance I will get all of them painted before the end of the year.

And to round out this update here are the latest additions to the painted pile, a Rust Monster and some Spiders all from my Reaper Bones 1 box. These were a nice break between painting up lots of elves. 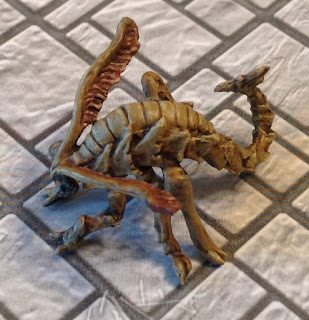