I am making some slow efforts to clear some items which have been hanging around partly done for a while. I sometimes find this quite a drag as items often end up partly finished because I have either lost enthusiasm for them or I no longer have any clear plans to use them. I've just completed the second batch of Tehnolog Werewolves which I started back in the summer. These ended up partly finished as I couldn't get them completed in time for the KoW campaign day and the largely werewolf based army I took to that even had its posterior kicked repeatedly resulting in me putting the army back into storage. I now have 4 hordes of werewolves painted up which is some serious overkill. If I'm honest I only bought this second pack as they were dirt cheap and with postage being the main cost adding a second made the deal look better. 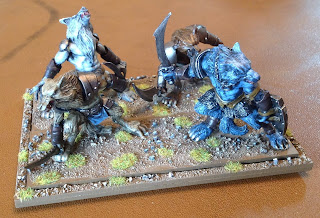 I'm now trying to work on the Tehnolog 54mmm undead knights which I got at the same time to use as wights in my KoW army. Again this is more of a case of grinding through them as I have lost my enthusiasm for the miniatures as bit. I'm sure they will look great once they are done.
Posted by Maccwar at 10:39 No comments:

The green and the mean

And as usual October brings the Clash of Kings, and as per usual I decided to add something new to my army at the last minute. This time I decided I wanted to take the full complement of 3 war trombones with me and also the goblin living legend, Grogger Split-Tooth, from the Edge of the Abyss book. There is no official miniature for Grogger so I chose to paint up a Kevin Adams goblin warlord that I had to hand. 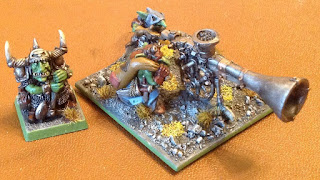 Both new additions did pretty well in the tournament, shame about the general!

Of course simply painting up two new items wasn't enough so I also went round and improved the basing on my entire goblin army because it seemed like a good idea at the time. My orcs and goblins suffer from being the first armies that I collected and the basing style could be described as dated (if you were being kind). To improve things I added clumps of a contrasting  dark green flock to the bases and washed all the flock with diluted PVA to blend in the colours. Once everything was dry I then added grass tufts and bushes to break up the plainer areas. Then end result makes them look a lot better then they did. The basing is still not fantastic but it never will be unless I completely re-base everything and that is not going to happen.
Posted by Maccwar at 12:22 No comments: