Two updates in a day - who could have predicted that?

This is a War Drum I have built for Kings of War using GW orc bits that I had lying around. I have several more on the work bench including one of the official Mantic models. This one had the honour of being painted first purely for practical reasons as it required less work to complete (the guard at the back was already part painted from the early 2000s).

I made a big push to get it ready for tonight as I have been using the unpainted model in games for for the past couple of weeks and I didn't want to go three games on the trot with unfinished models on the table. 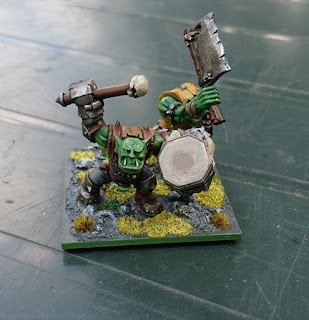 Next up should be more orcs. I'm planning to use them at at least one upcoming tournament and want to have as many painted options available as I can.
Posted by Maccwar at 18:28